Louisa Zolkiewski, a former MRC Harwell PhD student, has been awarded the Genetics Society’s inaugural Bruce Cattanach Prize, a new annual prize for an outstanding PhD thesis related to the use of non-human in vivo animal models.

Louisa received the award for her thesis, “Investigating the function of coding polymorphisms within the TBX15-WARS2 locus associated with waist-hip ratio as a risk factor for metabolic syndrome”, which was based on work she did with Roger Cox’s group in the Mammalian Genetics Unit (MGU) at MRC Harwell. The waist-hip ratio provides a measure of fat distribution and is associated with risk of developing diseases such as type 2 diabetes and cardiovascular disease. The overarching aim of Louisa’s project was to characterise two single nucleotide polymorphisms (SNPs) that had been identified in the coding sequence of the TBX15 gene, via human genome-wide association studies.

As a result of these two SNPs being found in the coding sequence, the TBX15 transcription factor protein has an altered amino acid composition and Louisa first used computer modelling approaches to demonstrate how this leads to a subtle 3D structural change in the protein, which alters its protein–protein binding properties. Louisa then used Tbx15 mouse models, generated by the Mary Lyon Centre, to investigate the role of this gene in adipose tissue biology and found that the genetically altered mice had impaired fat-mass phenotypes. This suggested an important role for Tbx15 in regulating fat distribution and body composition. TBX15 is a transcription factor, so this role is probably accomplished by regulating the expression of other proteins. Louisa went on to identify a network of genes regulated by Tbx15 in adipose tissues from the genetically altered mice and in human and mouse cells that overexpress TBX15. This work enhances our understanding of the complex biology at play in the control of fat distribution and body composition.

The Bruce Cattanach Prize is a 2022 addition to the Genetics Society award portfolio and will be awarded annually alongside other prizes, medals and lectures that include the Mary Lyon Medal and the JBS Haldane Lecture. The prize celebrates Bruce’s tireless nurturing and encouragement of junior scientists in the use of animal models and the awardee receives an invitation to present their work at a Genetics Society Scientific Meeting as well as £500 in prize money.

Bruce Cattanach spent much of his career at MRC Harwell, first joining the Genetics Division of the MRC Radiobiology Unit at Harwell in 1969 and staying until he retired in 1998. Throughout his career, Bruce made a remarkable number of fundamental discoveries in several areas of mammalian genetics, including mutagenesis, X chromosome inactivation, sex determination and imprinting. He was also head of the Genetics Division here from 1987 and then was made acting director of the newly created Mammalian Genetics Unit in 1996. This connection was not missed by Louisa: “This award was made particularly meaningful as I undertook my thesis at the same institute where Bruce had carried out his mutagenesis research for almost 30 years – in fact, I spent several hours in the Cattanach conference room with my supervisor Roger editing my thesis chapters!”

This award follows Louisa last year being the recipient of the Weilin Wang Prize, an annual award presented to the PhD student who has made the greatest contribution to life at MRC Harwell beyond their research activities, a testament to Louisa’s commitment to her colleagues as well as to her scientific interests. Having completed her PhD, Louisa is now working as a senior scientist at Gentronix, a contract research organisation in south Manchester: “I’m excited to be applying the skills and genetics knowledge I gained during my PhD to conduct genotoxicity assays to ensure safer chemicals and medicines reach the market.”

About the award, Louisa said:

“It was an honour to be nominated for, and to have been awarded, the inaugural Bruce Cattanach Prize for my thesis work. The in vivo portion of my DPhil was the main part of my thesis and this work would not have been possible without the incredible staff at the Mary Lyon Centre who kept my lines going throughout the COVID-19 lockdowns. I am eternally grateful to all the staff who generated and looked after my mouse colonies and all those who spent hours training me in the varied in vivo metabolic phenotyping techniques.”

Alongside Louisa, we would like to take this opportunity to congratulate a number of other MGU PhD students who have recently successfully defended their PhD theses, including Zeinab Ali, Anna Parsons, Amy Southern, and Gurpreet Bharj. Congratulations to all of you! 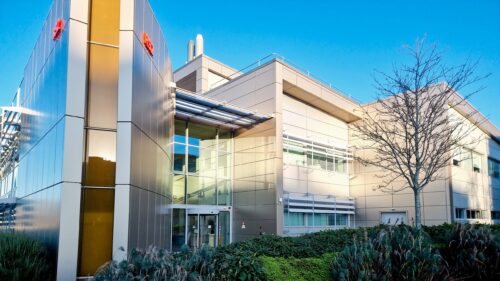